In the past year, China's grid-connected large-scale wind power and optoelectronic industries encountered unprecedented difficulties due to overcapacity and anti-dumping in European and American markets. The small and medium-sized wind power generation industry did not receive much impact. Although output and sales volume have declined, the The technology, quality, reliability, application scope, and export have all been developed. In particular, the party's "eighteenth" proposed that "to build an ecological civilization, support new energy and renewable energy development," undoubtedly brought good news for the development of small and medium-sized wind power industry. This article summarizes the status quo, highlights, existing problems, and suggestions for the small and medium-sized wind power generation industry with a unit capacity of 100 kW or less in China.

1 Status of the Industry 1.1 Basic Information of Enterprises According to the data collected by 31 major companies, the total registered capital of each company is 516 million yuan, the original value of fixed assets is 4 billion yuan, the net value is 2.1 billion yuan, and the floor area is 654,500 square meters. The area of a€?a€?256900 square meters, the total number of employees 3100 people, including 842 technical personnel, accounting for 27.2% of the total number of people, engineers and technicians above 406, accounting for 48.2% of technical personnel, annual production capacity of about 200,000 units.

1.3.4 Output over the years Since 1983, the Association has been producing annual statistical reports on the company's business statistics. By the end of 2012, it had cumulatively produced 1,107,600 small and medium-sized wind turbines.

1.3.5 Analysis of the above-mentioned statistical data In 2012, the output and sales of the products all declined, mainly due to:

1 Some companies have relatively large production volumes in 2011, and the products have created a backlog of inventory, which in turn reduced sales in 2012, resulting in a reduction in production volume in 2012.

2 A small number of companies have not submitted data overdue.

1.4.3 Unit sales composition The single unit capacity is 300W, 400W, and 1kW, which accounts for two-thirds of the total sales.

2 Exports 2.1 Statistics of export data of small and medium-sized wind turbines of the General Administration of Customs of the People's Republic of China In order to have a more reliable grasp of import and export, statistical analysis can be conducted according to the export data of the State General Administration of Customs.

2.2 The proportion of product exports to six continents In 2012, more than half of wind turbines of medium and small size were exported to Europe, followed by the Americas and Asia.

2.5 Imports of small and medium-sized wind turbines In 2012, some import and export trading companies imported 38 small and medium-sized wind turbines from 7 countries and regions, an increase of 126% year-on-year, and the import amount was 2.26 million US dollars. Importing countries and regions They are Japan, South Korea, Taiwan, Denmark, Germany, the Netherlands, and the United States.

3 Some small and medium-sized wind turbines have achieved world-class level of product technology. In the past year, Chinaa€?s small and medium-sized wind power generation technology has made great progress, which has made domestic and foreign counterparts stand out. Some companies are stronger and bigger, and pay more attention to brand, quality and reliability. They have obtained multiple certifications. 31 companies have 127 patents, 252 new and practical patents, 89 appearance patents, and international PTC invention patents. 7 items, among which prominent companies are:

3.1 Zhejiang Huaying In 2012, Zhejiang Huaying's 5kW variable pitch wind turbine passed the accreditation certificate of the UK's MCS by the international certification body TUV. This is the first international type certification that China and the entire Asian country have obtained. Their products solve the problem of reliability and durability running in high winds. The HY-30kW unit installed in Dongfushan Island, Zhejiang Province experienced three typhoons, and the highest experience wind speed reached 47m/s and is still in normal operation.

3.2 Guangzhou Redhawk Guangzhou Redhawk solved the problem of large wind turbine noise, etc. The product has high wind energy utilization coefficient, strong unit applicability, high reliability and other features, and anti-wind capacity to achieve wind speed 60m / s, won the US ETL, European ROHS and SGS certification, the products are popular in the international market, in 2012 the export of products has multiplied.

3.3 Shanghai Zhiyuan Shanghai Zhiyuan has 46 engineers and technicians who invest millions of yuan in research expenses each year, focusing on the research and development of off-grid and distributed grid-connected wind power generation systems. The technical performance of the products is at the leading position in China; Obtained 7 national invention patents and 2 international invention patents; 50kW wind turbines passed TUV test; 60kW inverters used in grids were ETL certified and G59 certified; full range of products passed CE certification; 100kW wind turbines formed batch exports In the country, it has become the largest wind and solar complementary base station solution provider.

3.4 Qingdao Anwar Qingdao Anwar has always been committed to improving the quality, safety and reliability of wind power products. It has a small wind power professional technical team and has strong research and development capabilities. They focused on 5kW and 10kW variable pitch wind turbines, built world-class brands in accordance with IEC61400-2 international standards, and obtained installation approvals and certifications from Denmark, Germany, and other countries. In 2012, exports of products increased by about 60%.

4 Development and highlights of small and medium-sized wind power industry 4.1 The State Grid announced that self-built power stations and grid-connected power generation are available, and users can sell power to power grid companies. The State Grid Corporation of China has officially issued the a€?Opinions on Doing a Distributed Power Grid Service Worka€?. This is undoubtedly a major move to promote the development of distributed power. From March 1st, 2013, users can connect to the power grid at a level of 10kV and below. The electricity generated by the wind turbines can be used online, or the excess power can be used to access the power for self-use. The user can generate power from the power grid. Provide, Internet, separate electricity off the net, electricity prices to implement national policies. State Grid Corporation provides free gateway metering devices and metering meters for power generation. Wind power projects do not charge for system backup capacity. In this way, in addition to a large number of exports, wind turbines with a kilowatt level or above can be connected to the grid for power generation in the country, which is a potential market.

4.2 The Ministry of Agriculture established the "General Station for Agricultural Ecology and Resources Protection"

In 2012, with the approval of the State Council, the Ministry of Agriculture established the a€?General Station for Agricultural Ecology and Resources Protectiona€?. The terminus will undertake rural energy and energy-saving emission reduction policy research and technology demonstration and promotion, and undertake the business guidance of the national rural energy system construction. The Ministry of Agriculture plans to organize the creation of "Beautiful Village" activities in the near future.

From 2013 to 2015, 1,000 "Beautiful Villages" were selected to create pilot units in the country. One of them is to promote the development of renewable energy in rural areas, adhere to the a€?16-charactera€? policy of rural energy development, and integrate and promote new energy technologies and products based on conditions and farmersa€? needs, including small-scale wind power systems to solve problems and heating. Bathing, lighting and other needs, increase the supply of clean energy, enhance the quality of life energy, protect and improve the rural ecological environment, and promote the construction of rural ecological civilization.

4.4 The new standard for small and medium-sized wind turbines has been submitted for approval. The new national standard GB/T18451.2-2012 "Wind Generator Power Characteristics Test" was issued on May 11, 2012, replacing GB/T18451.2-2003, and It will be implemented on October 1, 2012. At the same time, the small and medium-sized wind power industry adopts the national standard "Design requirements for small-scale wind turbines" of the IEC61400-2 standard, which has been reviewed and approved by industry experts. The approval draft has been submitted to the National Standards Committee and will be released in 2013. In order to ensure the safe and reliable operation of wind power generation systems in rural energy construction, the Ministry of Agriculture plans to formulate a a€?Operational Quality Inspection Regulations for Off-grid Wind Power Generation Systemsa€?. The Ministry of Industry and Information Technology intends to supplement the existing wind-solar hybrid power generation system standards for mobile base stations of the Ministry of Industry and Information Technology in order to meet the current technological development requirements in the field of mobile base station communications.

The GB/T 29494-2013 "Small Vertical Axis Wind Turbine Generator" drafted jointly by the relevant wind power standardization organizations on both sides of the Taiwan Straits has been completed and the draft has been submitted to the National Standardization Committee.

4.5 Promotion and application of small and medium-sized wind power and wind-solar hybrid power generation systems in Inner Mongolia The a€?Power Projecta€? and a€?Golden Sun Projecta€? put forward by relevant national authorities in leading countries have promoted the development of small and medium-sized wind power industry. The Inner Mongolia Autonomous Region is the earliest province with the largest number of wind turbines, the largest number of wind turbines, and the largest investment in China. As early as the 1970s, small wind turbines were strongly promoted. Mainly 50W, 100W units to solve the life of farmers and herdsmen. Since the beginning of the 21st century, in order to further improve the quality of life of farmers and herdsmen, and further solve the problem of power consumption in the uncharged regions of the Inner Mongolia Autonomous Region, Qixian County, and border checkpoints, Inner Mongolia Electric Power Company has implemented the a€?Energy-free New Energy Sources in the regiona€?. "Projects" use wind-solar hybrid power generation systems (mainly 300W wind power and 200W photovoltaics). Through tenders from 2010 to 2012, a total of 49,242 wind-solar hybrid power generation systems have been promoted, including 20,519 sets in 2012 with an investment of 287.74 million yuan.

5 Recommendations for the development of the industry 5.1 The state promulgates supportive policies It is recommended that the state support the small and medium-sized wind power generation industry, establish a reasonable benchmarking price as early as possible, and provide preferential tax concessions; subsidize purchase of small wind turbines for farmers and herders; The technological transformation of manufacturing companies gives discount or semi-subsidy loans.

5.4 Product quality and reliability To cause the industry to pay high attention to user feedback, a small number of small and medium-sized wind turbines often have faults in the application process, such as blade fracture, generator drop, and controller burnout. Therefore, we must arouse great attention in this industry, continue to work hard on product quality and reliability, and establish a good image for the industry.

5.5 Small and medium-sized wind energy industry should do its utmost to abide by the ten principles of self-discipline in the industry. It is hoped that self-discipline will standardize their respective behaviors, bring stamina to the development of the industry, use China's market to cultivate China's manufacturing industry, and then use China's manufacturing industry to promote the development of the Chinese market, from wind power to a wind power power.

Outdoor Rental LED Screen description: in order to meet the requirements of all-weather performance and performance rental, outdoor LED mobile rental screen is particularly important. Its appearance makes up for the requirements that indoor LED mobile rental screen cannot achieve. Also compared with the traditional outdoor scenery, the grade is not high enough, the display content is single, affected by the environment, the wind is easy to deform, the heat is easy to change color and so on. Outdoor LED rental screen completely makes up for the shortage of traditional scenery. 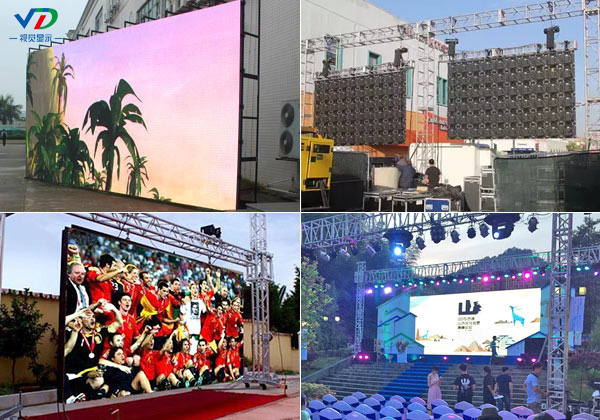 2. It has strong UV resistance. It can be used outdoors for a long time due to the influence of sunlight. The lamp beads do not fade, but the color is still bright and the light is slow.

3. Outdoor LED mobile rental screen, with rain proof and dust-proof grade up to IP65, rain and wind are unimpeded, and rain proof cloth is used to prevent weather and rain.

Precautions: as for indoor screen, pay attention to corners during handling and disassembly, handle with care, and cover the back cover for outdoor use to avoid water flow. 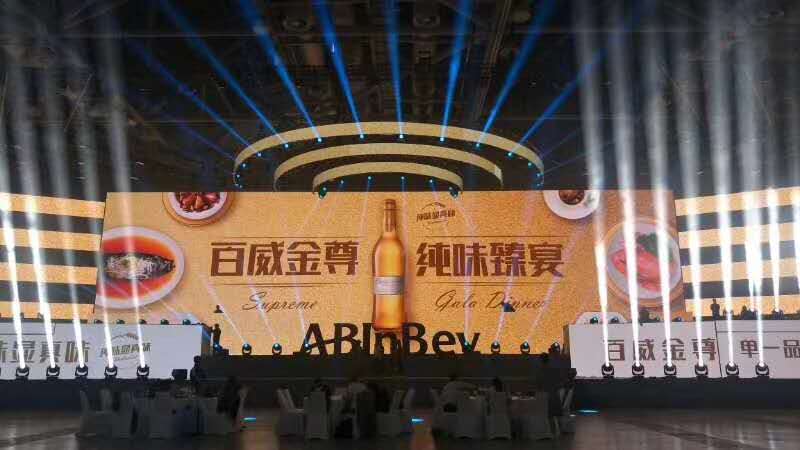