LED solid-state semiconductor lighting technology is considered to be a strategic energy-saving technology for the 21st century. LED road lighting technology has been developed and promoted in many countries and cities in China, Europe and North America. LED street lamps have a longer life (more than 5) compared to metal halide lamps (MH) and high pressure sodium lamps (HPS). In addition, LED street lights have better controllability and light efficiency, which can save up to 50%. Another green energy source of LED street lights is characterized by the fact that the light source itself does not contain harmful substances such as mercury. In terms of optics, the small light source characteristics of the LED chip can be easily optimized to achieve accurate light distribution and secondary optics, accurately control the direction of the light, and distribute the light to the road to be illuminated to prevent light pollution and glare.

The secondary optical design is an important technique for determining the light distribution curve, output light efficiency, uniformity, and glare index of LED street lamps. The luminosity distribution of most high-power white LEDs on the market is the Lange distribution, the spot is circular, and the full width of the beam angle at half the peak intensity is about 120?°. If the LED street light is not designed with secondary optics, then the spot on the road will be a a€?cakea€?. As shown in Figure 1(a), about 1a??2 of the spot will be scattered outside the road. It is wasted, and the middle of the spot will be brighter and will gradually darken around. After the lamp is installed on the road, a clear distribution of light and dark spots will be formed between the street lamps, causing visual fatigue to the driver and causing an accident. LED street lights in this case cannot be called "energy saving" and "green lighting". The national urban road lighting design standard requires that the spot of the LED street light is as shown in Figure 1(b). The spot is rectangular, which can cover the road and has good uniformity. The secondary optics technology of LED, unlike other disciplines, is an interdisciplinary subject covering non-imaging optics and 3D surface modeling. The design of secondary optics can effectively solve the luminous efficiency, uniformity and light distribution angle of LED street lamps. Problems such as glare and safety, providing light distribution that meets the requirements of national standards, truly achieving environmentally friendly and green lighting. In addition, LED street lights have a good color rendering index (CRI), and can adjust different color temperatures as needed to meet different environments such as day, night, sunny and rainy days. 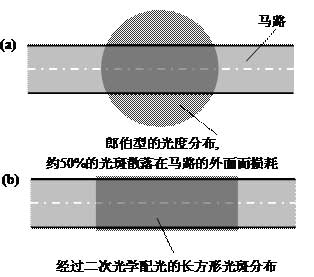 A fully reflective secondary optical lens that collects all 180?° of light emitted from the LED chip and redistributes it to a designated area is a good solution. The light distribution of the free-form surface can make the far-field angle distribution of the LED road light distributed as a batwing, making the light spot rectangular, and the middle and edge of the light spot are relatively uniform. With the principle of edge light, the lens can also realize the cut-off design and eliminate glare. . The following is a design method of a total reflection secondary optical lens. 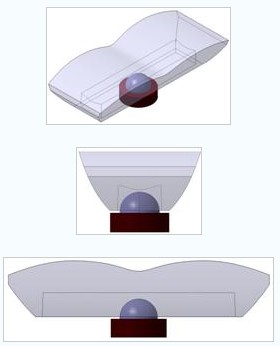 2 is a 3-dimensional model of a total reflection secondary optical lens. The lens is composed of four parts, a concave inner aspherical cylindrical mirror portion, a side total reflection prism portion, a total reflection prism portion at both ends, and a free surface of the upper surface "W" shape. The lens aligns the light of the Langer-type LED into a luminosity distribution of 120?° (along the road direction) in the X direction and 60?° (the direction perpendicular to the road) in the Y direction. The design of the lens follows the "edge ray principle" [1], that is, in the X direction, the edge of the output ray has an angle of ?±60?° with the optical axis, and all other output rays are distributed within this angle. In the Y direction, the angle of the edge light of the output light is ?±30?°.